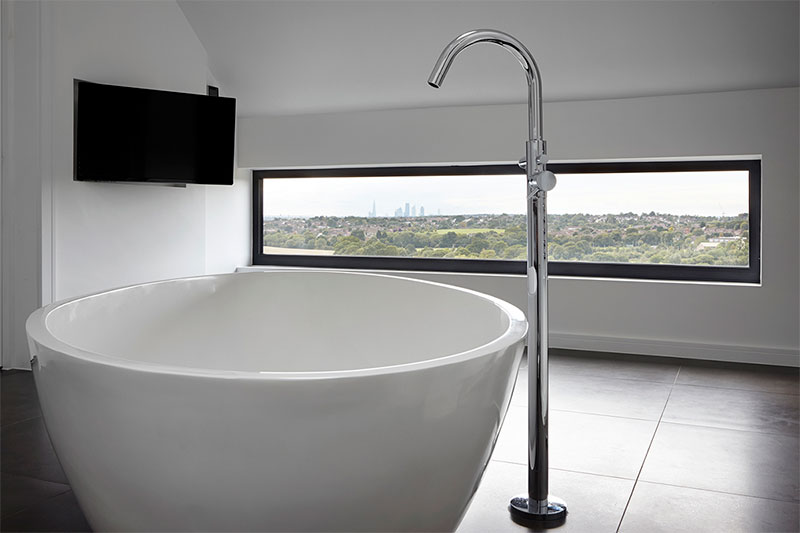 The Sunday Times: Framing the View

The Sunday Times’ Home section (17 April 2016) showcased Clear Architects’ Hill Road project as an example of how smart glazing can frame a view for added impact.

The Sunday Times‘ journalist Hugh Graham explains in the double-page feature, “Windows of Opportunity”, that:

“Instead of glazed walls that take in everything at once, overwhelming you with their vast sweep, smaller windows are in vogue, directing your gaze to an object or a tableau that has been carefully edited. It’s the window as Photoshop, the architect as editor.”

While there were numerous examples of this at the Hill Road project in Theydon Bois, Essex, The Sunday Times selected the stunning horizontal window from the master bathroom, which frames an incredible view of the London skyline.

“Recalling a bird hide, this slit window provides privacy for the master bathroom of a house in Theydon Bois, Essex. The frame gives the distant London skyline a cinematic feel: it’s as if you’re gazing at the Emerald City. Its long, low position was partly functional.”

Melanie Clear, one of the featured architects described in the article as a “discerning practitioner”, said of the Hill Road bathroom view:

“You wouldn’t have the dramatic effect if it were all glass. In the 1990s, with Norman Foster, there was glass everywhere. Now, if you’re a design-led architect, you will mix it up.”