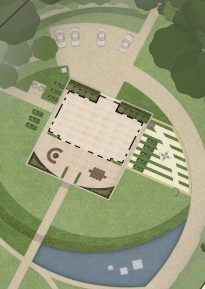 “An ‘exceptional’ new build has been granted planning permission within the Essex Green Belt in order to reinstate a former historic manor house and estate originally designed by renowned architect Henry Holland and landscape architect Lancelot ‘Capability’ Brown – who celebrates his 300th anniversary this year.”

Though the land is still known locally as Debden Hall, there is no trace of the former  manor house, which was designed by Henry Holland in 1775. Fire destroyed the first Debden Hall in 1929. A second Debden Hall was erected on the estate, in a different location, in 1936 but was demolished in the 1960s. The landowner has now committed to bringing the site back to its Henry Holland and Capability Brown former glory.