Clear Architects has become a Climeworks Pioneer, responsible for permanently removing 255kg of carbon dioxide (CO2 emissions) from the air each year.

Since the beginning of the industrial revolution, humanity has emitted approximately 2,000 billion tons of CO₂ equivalents. Around half has accumulated in the Earth’s atmosphere, contributing to global warming and the current climate emergency.

Clear Architects was impressed by Climework’s novel technique for removing and safely storing harmful CO2 and have joined its revolution of change during the 2021 United Nations Climate Change Conference (COP26) in Glasgow.

“I am thrilled to be one of Climeworks Pioneers and to take this additional step to de-carbonising the air we all breathe.

Personally, and as a practice, we are committed to making a positive contribution to our environment, which is at the heart of what exemplary architecture is really about.

We don’t just design buildings; we’re designing the future and the world we want to live in.”

A member of the Association for Environment Conscious Building (AECB), Clear Architects’ commitment to sustainability goes beyond the usual.

The practice is behind the first car-free development in Epping Forest, secured a £100k government investment to develop a new sustainable building material, and built it’s own headquarters’ studio to high sustainable and low-impact standards.

In addition, Clear Architects has partnered with zero-emissions gardeners ZEG, and its team of architects arrive at appointments in the practice’s new all-electric Honda-e vehicle.

Climeworks – How it works

Based in Iceland, Climeworks operates the largest direct-air capture plant in the world. The heat and electricity required to run the direct air capture process is supplied by the Hellisheidi Geothermal Power Plant. It has received funding from Microsoft’s climate fund and received support from Accenture.

Once the CO₂ is captured, it can be permanently and safely turned into stone through rapid mineralization which is a natural occurrence where the CO₂ reacts with basalt rock. 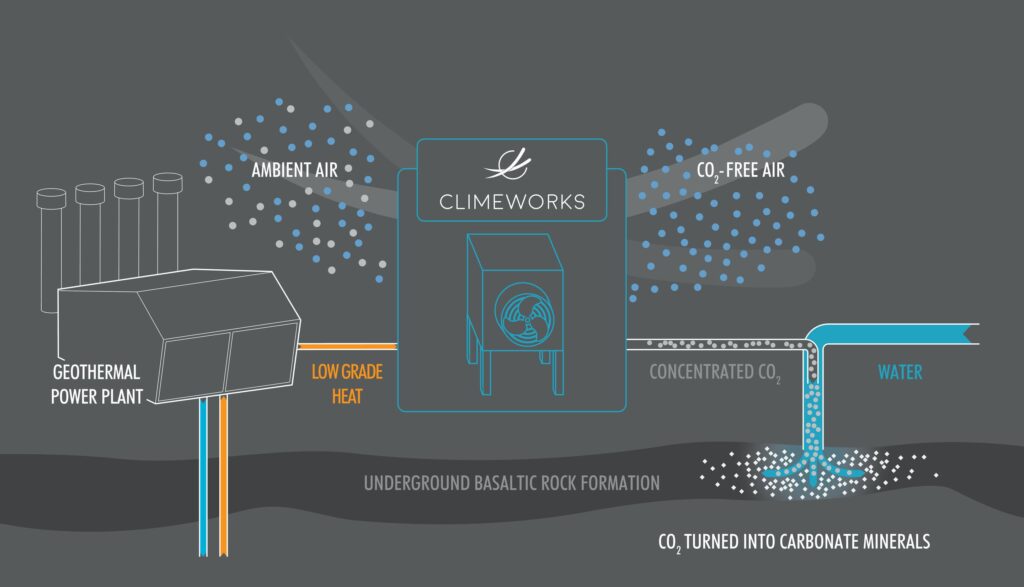 For more information on the Climeworks process, click here.